3INA launched just over a year ago with their aim to shake up the “one size fits all” approach to the cosmetics industry. The 3INA Makeup Bestsellers are a collection of products which were voted for as being original, enduring and unique to 3INA. The 3INA Bestsellers consists of fifteen products in total, and I have three of the products which I’ve been trying as my first foray into the 3INA Makeup range.

I’m not entirely sure how you say the brand name with the 3? I think it might be ‘Mina’ as three-na sounds a little strange, but I can’t find anything online with the definitive pronunciation. I really do like that the 3INA’s brand message is that they feel ‘makeup should enhance rather than alter’, and they have a super varied product range.

“A flashbulb for your skin, this special highlighting powder leaves you looking lit from within. Use The Blush Brush to stroke over cheekbones and temples or simply use your fingers to dust over eyelids or the Cupid’s bow. Brush it over collarbones and shoulders to add radiance when wearing a strapless top. Warning: this glow is major!”

The powder highlighter looks very metallic in the pan, but the highly metallic appearance doesn’t translate to the skin like I thought it would. It almost looks as if a liquid illuminator has solidified within the pan, as it is so reflective and metallic but the on the skin it’s massively more subtle which will please some, and perhaps disappoint those who love a blinding highlighter.

I love highlighter, but I personally don’t like a crazy intense highlighter so I really like the more subtle sheen which the shade 201 gives. Shade wise 201 looks like a pale gold within the compact, but on my skin it comes off more peach than gold, and it has a very finely milled and smooth texture so it sits nicely on the skin without emphasising pores. I’d love to see 3INA introduce more shades such as a pale champagne, or a light cool toned gold as the formula is so lovely.

“Designed for those who love the application of a lip gloss but want the color payoff of a longwear lipstick. Once on the lips, the gloss becomes an opaque matte lipstick that won’t budge. Apply one coat over a base of lip liner, starting at the Cupid’s bow and working outwards.”

From only two shades available to the complete opposite with fourteen shades to choose from for the 3INA The Longwear Lipstick, which is really impressive for a shade range. I have the shade 505 which 3INA describe as “pink” which I don’t think does the shade justice to be honest, as it’s more of a browny toned pink which is bordering on being a terracotta shade.

The packaging looks like it would be a pull off lid like a conventional lipstick, but it’s a twist lid which fools me everytime I use it, but the packaging is very sleek and I like the clear base. The one downside for me is that the doefoot applicator is very firm, and it doesn’t lay down colour very well onto the lips as it kinda scrapes off colour as you swipe across the lips, hopefully my swatches explain what I’m trying to say.

I’ve never come across a liquid lipstick applicator like this before, but it just doesn’t coat the lips very well which is a shame as the formula is great for a liquid lipstick, as it dries down to a fully powdery matte finish in less than a minute. To get around the applicator issue, you can use a lip brush to apply but it’s not ideal should you require touch-ups when out and about, but perhaps this applicator is a one off and the others aren’t as firm and hard.

I’ve got a weakness for eyeshadows anyway, but this has to be one of the prettiest eyeshadows I’ve ever seen. There are eighteen shades to choose from, which include a super bright yellow, green and blue all the way through to more neutral tones and smokey hues. I have the shade 312 which is absolutely stunning, and insanely pigmented. Packaged within a circular glass jar with a screw lid, the cream eyeshadow has a mousse like consistency which feels relatively firm, and you only need a tiny amount.

In my swatch photo, the more intense of the two swatches was from using the same amount of product I’d use when using any other cream eyeshadow, but it was way too much product. The second swatch is from using only a tiny amount of product, and it’s still very opaque and pigmented. I’ve never seen such an high shine metallic finish from a cream eyeshadow before; it almost has a foiled effect on the lids, which really sparkles in the light.

Colour wise, 212 is a pale rose gold shade which I recommend to absolutely everyone as it’ll flatter any skintone. I applied these swatches onto bare skin with no primer or base underneath whatsoever and wow I couldn’t remove them without using an oil based makeup remover. They literally wouldn’t budge with my holy grail Micellar Water Wipes which is what I use to remove all makeup swatches.

If you have oily eyelids, or find your eyeshadows fade and crease throughout the day, you need to try this eyeshadow formula as I’ve never found such a pigmented, longlasting formula. The Cream Eyeshadow is most definitely the standout product from the trio I’ve tried, and I will most definitely be purchasing further shades as I am beyond impressed. 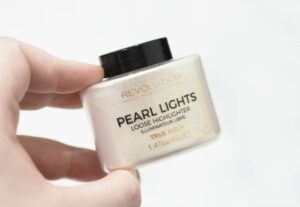